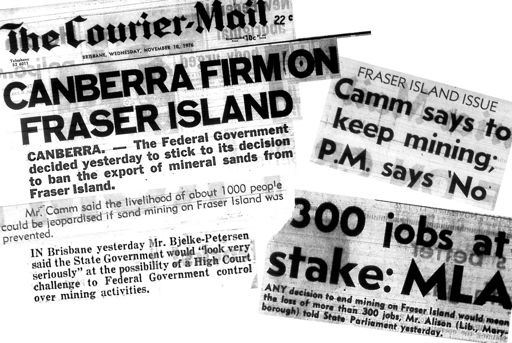 Why does this government need 14 years?
In 1976 the Fraser government stopped sand mining in just 6 weeks after banning exports of mineral sand from the island. In contrast, the Bligh Government have enacted laws to extend mining on Stradbroke for 14 more years, sidestepping future use provisions of the Mineral Resources Act, which applies to every other mine in Queensland.

There were cries of gloom and doom and loss of jobs in 1976 just as we are hearing now at Stradbroke. But what happened at Fraser Island? A successful eco-tourism industry was developed, attracting people from all over the world to the World Heritage listed largest sand island in the world. The Fraser Coast has become a thriving residential and tourism area on the back of the island’s fame. No one, I’m sure, has ever looked back wistfully saying ‘if only sand mining had been allowed to continue our lives would have been better’.

Stradbroke Island will prosper once sand mining ends. Once the island is unlocked from the iron grip of the wealthy and politically powerful sand mining company, it will be far more appealing for tourists and potential residents. The notes to the NSI Act state categorically “Creating a mine-free NSI will greatly assist the development and growth of businesses and employment opportunities in ecologically sustainable tourism and other like activities”. Sand mining company Sibelco has run, through its influential Public Relations company, an hysterical and highly exaggerated campaign about the economic impact of stopping mining on the island.

Actually Sibelco planned to wind down and shed jobs anyway, since mineral sands would have been exhausted by 2027 at the latest. The company has a “gradual employment downsizing” policy and can only retain half of the current workforce after the Yarraman mine closes down in about 2014.
Increasingly, mine employees are commuting to the island from the mainland and thereby contributing very little to the island’s economy.

So change is already happening. North Stradbroke Island is an increasingly diverse economy with more houses being built, more visitors all through the year, more varied business opportunities, more commuting, all due to societal, technological and population changes. (The popularity of internet grocery deliveries from the mainland indicates modern social reorganization - although it doesn’t say much for the commitment of some locals to the island economy!)

If mining continues after Yarraman closes, this local economy will be in limbo for more than 10 years. Things will limp along with some people employed in mining but most looking for other opportunities, which will only be curtailed by mining domination and destruction of the landscape.

Stradbroke does not have the isolation issues of a remote mining town and it is in a far better position to develop a diverse economy than Fraser Island was in 1976.

It is irresponsible for a government to allow minerals to be gouged out of the island’s fragile environment for short term profit, when the future of this place so obviously relies on its beauty. Tourists do not appreciate the ugly industrial landscapes, nor do most people who live here. The sight of encroaching bare sand patches is a depressing vista from the Gorge Walk and for local residents and visitors who are reminded of the destruction whenever they look out their windows or travel over the bay.

The only basis of a long term economy is diversity, anchored to the fact that North Stradbroke Island is a very special natural place with an intact indigenous heritage, just 30 minutes to a conurbated city of 3 or 4 million people. It is this that will keep people in jobs, not a decaying and destructive industrial dinosaur.

The destroyed landscapes will never be equal to the original complex bushland. People travel great distances to see natural wonders. Fraser may be the largest sand island in the world, but Stradbroke is the second largest. Let’s finally have some foresight and demand this government ends mining destruction without any more delay.