The results show the full force of the flood with water quality deteriorating due to the significant amount of sediment and nutrients that have flowed into the bay from catchments.

Three of the region’s five catchments flowing into the bay scored F (which means “Conditions do not meet set ecosystem health values; most key processes are not functional and most critical habitats are severely impacted”) and Central Bay, Deception Bay and Bramble Bay scored D+, D+ and D-.

The good news is, in spite of Southern Moreton Bay scoring F, the water around Stradbroke Island is generally of a superior quality. The Eastern Banks scored A- and Eastern Bay scored B- while Waterloo Bay scored B+.

There have however been reports of increasing mortality rates for dugongs and turtles and oyster farmers have had to remove barnacles that have grown due to increased nutrient levels. The local oysters themselves seem to be doing well. 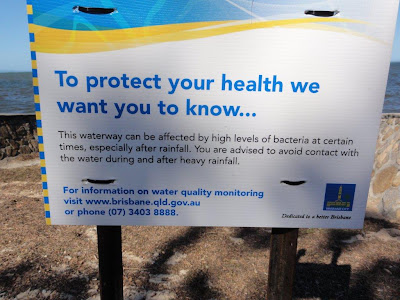 More info including maps of the regions may be found at www.healthywaterways.org