One of Straddie’s most delightful common birds, the Willie Wagtail was recently the subject of a blog by Queensland wildlife writer Robert Ashdown. Robert gave permission to FOSI to reproduce his musings…


“I don’t usually associate Willie Wagtails (Rhipidura leucophrys) with beaches, but some beautiful images taken at North Stradbroke Island by Michael Hines made me ponder just how ubiquitous these real characters are.
The Willie Wagtail is one of Australia’s most familiar birds, found throughout most of the continent. The name “wagtail” is confusing, because although it flicks and wags its tail from side to side, it is actually a member of the fantail family, and not one of the wagtails of Europe and Asia. [Bird: The DK Definitive Visual Guide]

Exploring clearings, and familiar in urban areas, Willie Wagtails forage conspicuously in open places and are the only fantails to feed constantly from the ground. Through this capacity they have spread throughout Australia, avoiding only dense forests and treeless, perchless plains. [Reader's Digest Complete Book of Australian Birds.]

Small but fierce, with serious eyebrows

When breeding, Willy Wagtails defend their territory against even large predators, circling their attacker’s head in a figure-of-eight pattern uttering an aggressive ‘ricka-ticka-ticka-tick’. They defend their territory against other wagtails, enlarging their eyebrows in threat. Defeat is signalled by reducing the eyebrows and retreating. [Reader's Digest Encylopedia of Australian Wildlife.]

A spirited and sweet voice

As a child I remember lying in bed at night listening to a strange bird call that would echo off the quiet houses —”sweet pretty creature” — loud and repeated for what seemed forever. Adults had no answers to my questions about this call, and it took me many years to work out that it was a Willie Wagtail. The nocturnal call of the Willie Wagtail is most commonly heard during moonlit nights and especially during the breeding season (August to February). From my own experience, the presence of a bright street light or car park lighting can also contribute to this phenomenon.
Once started, the song can continue for lengthy periods, often stimulating other birds nearby to also call. It is thought that the nocturnal song in Willie Wagtails is used to maintain its territory. During the night there is no need for parental duties such as feeding the young or protecting the nest, so the song can be used to consolidate the territory. Sound tends to carry further at night and there are fewer sounds in competition and this adds to its effectiveness. It has been found that most nocturnal songs are from a roosting bird some distance away from the nest.

The Willie Wagtail is an adaptable bird with an opportunistic diet. It flies from perches to catch insects on the wing, but will also chase prey on the ground. Wagtails eat, among other things, butterflies, beetles, flies, dragonflies, spiders and millipedes.
They will often hop along the ground behind people and animals as they walk over grassed areas, to catch any creatures that they flush out. These birds wag their tails in a horizontal fashion while foraging. Why they do this is unknown but it may help to flush out hidden insects — or maybe they just like wagging their tails.

Willie Wagtails usually pair for life. Anywhere up to four broods may be raised during the breeding season, which lasts from July to December, more often occurring after rain in drier regions.
Willie Wagtails build a cup-like nest, made of strips of bark or grass stems, and woven together with spider web or even hair from dogs or cats. They have even been seen trying to get hair from a pet goat. Photo courtesy Mike Peisley.
Wagtails may build nests on or near buildings, and sometimes near the nest of Magpie-larks, perhaps taking advantage of the aggressive and territorial nature of the latter bird, as it will attempt to drive off intruders.
From two to four small cream-white eggs with brownish markings are laid, and these are incubated for about 14 days. Both parents take part in feeding the young, and may continue to do so while embarking on another brood. Nestlings remain in the nest for around 14 days before fledging. Upon leaving, the fledglings will remain hidden in cover nearby for one or two days before venturing further afield. Parents will stop feeding their fledglings near the end of the second week, as the young birds increasingly forage for themselves, and soon afterwards drive them out of the territory. [Wikipedia] 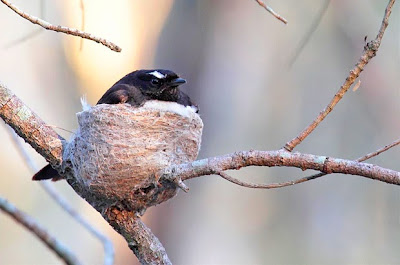 Thanks again to Robert Ashdown for allowing FOSI to publish this edited (for space) version of his June 2012 blog – to read the whole blog including an interesting discussion of Aboriginal names and stories and view more beautiful photos go to http://www.robertashdown.com/blog/ ^
By Friends of Stradbroke Island - December 24, 2012