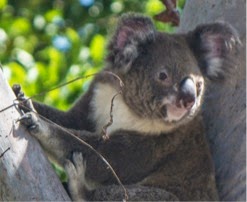 The serious risks to human life, property and to flora and fauna associated with out of control bushfires on North Stradbroke are obvious.

The miners’ Environmental Studies Report (2003), required before mining could commence under Queensland law at the Enterprise mine acknowledges the risks:-

“Bushfires frequently occur on North Stradbroke Island as a result of both natural (eg lightning strikes) and human induced events (eg arson). Periodic low intensity fires are essential for the reproduction processes of many native vegetation communities on the island. However high intensity or unnaturally frequent fires can result in loss of property, human life and significant harm to native flora and fauna communities” (ESR section 3.2.6)
Considering its enormous profits are derived from mining and permanently damaging an internationally recognised, sensitive sand island, most people are likely to consider that Sibelco should strictly comply with its bushfire obligations. Its mining leases still cover around 50% of the island.

Front page article continued…Incredibly, an examination of Plans of Operations and other official documents submitted by the mining companies to the Queensland government over the past decade expose Sibelco and its (now) subsidiary CRL as thumbing their noses at Queenslanders, yet again.

The formal, written undertakings to the Queensland Government are contained initially in the Environmental Management Overview Strategy (EMOS 2003). These are repeated in the Plans of Operations submitted each year by the miner to government for approval to continue mining operations. Two of the undertakings are relevant:-

UndertakIng No.2 – "Sibelco Australia Limited will mine in accordance with its non-standard EA and the undertakings made in this Environmental Management Overview Strategy.”

Undertaking no. 21 – “Sibelco Australia Limited will operate in accordance with, and regularly review, a Bushfire Management Plan specific to its operations on North Stradbroke Island”.

Astonishingly, year after year, since at least 2003, the Plans of Operations have claimed that the mining company is “currently developing” a Bushfire Management Plan (BMP).

Year after year, the company’s Plans of Operations have acknowledged that a BMP should include:-
But despite all the known facts, by their own admissions, neither CRL (before the takeover in 2009) nor Sibelco, concluded developing a BMP. Why weren’t these breaches of undertakings challenged by government before approving, annually, the following year’s mining plans and before renewing expired mining leases?

Many other questions arise, such as:-