For the majority of the year Moreton Bay’s migratory shorebirds spend their time foraging on the bay’s mud and sand flats. Now, they are just starting to leave for warming Arctic climes where they breed annually.

Great Knot with Bar-tailed Godwits on sand bank off Amity Point, Photo by Athol Klieve
The bay provides crucial habitat for critically endangered Far Eastern Curlews and Great Knots and for vulnerable Bar-tailed Godwits, among other wader species.
Moreton Bay’s environmental significance is to a large extent as a refuge for these remarkable migratory birds, who are now under severe threat from loss of habitat through coastal reclamation.
So significant are these birds that a number of international agreements have been signed by Australia to protect them.
Moreton Bay was declared a Ramsar site 25 years ago. Under this international wetland treaty migratory birds and their habitat gained a specific protection. The important bird habitat provided by the mud flats of the western bay is listed as a major element of the designation.
Camba, Jamba and Rocamba are international agreements signed by Australia with China, Japan and Republic of Korea, all pledging to protect migratory birds and their habitat.
Now clad in rusty breeding plumage, well-fed and plumped up, the migrants are readying themselves to embark on their odyssey. Far Eastern Curlews, largest of these birds, are among the first to leave and some have already departed.
We wish them well on their gruelling flights north along the East Asian- Australasian Flyway to Siberia and Alaska.
Article by Sue Ellen Carew
Learn more about shorebirds at this year’s AGM
This year Friends of Stradbroke Island’s Annual General Meeting will be held in Brisbane:
Magda’s Community Hall, Boundary Rd Rainworth,3pm 28 April 2018.
Our speaker will be Micha Jackson who will be discussing the remarkable lives of migratory shorebirds, the subject of her PHD. Micha is helping to enliven interest in these special birds and her presentation is highly recommended. 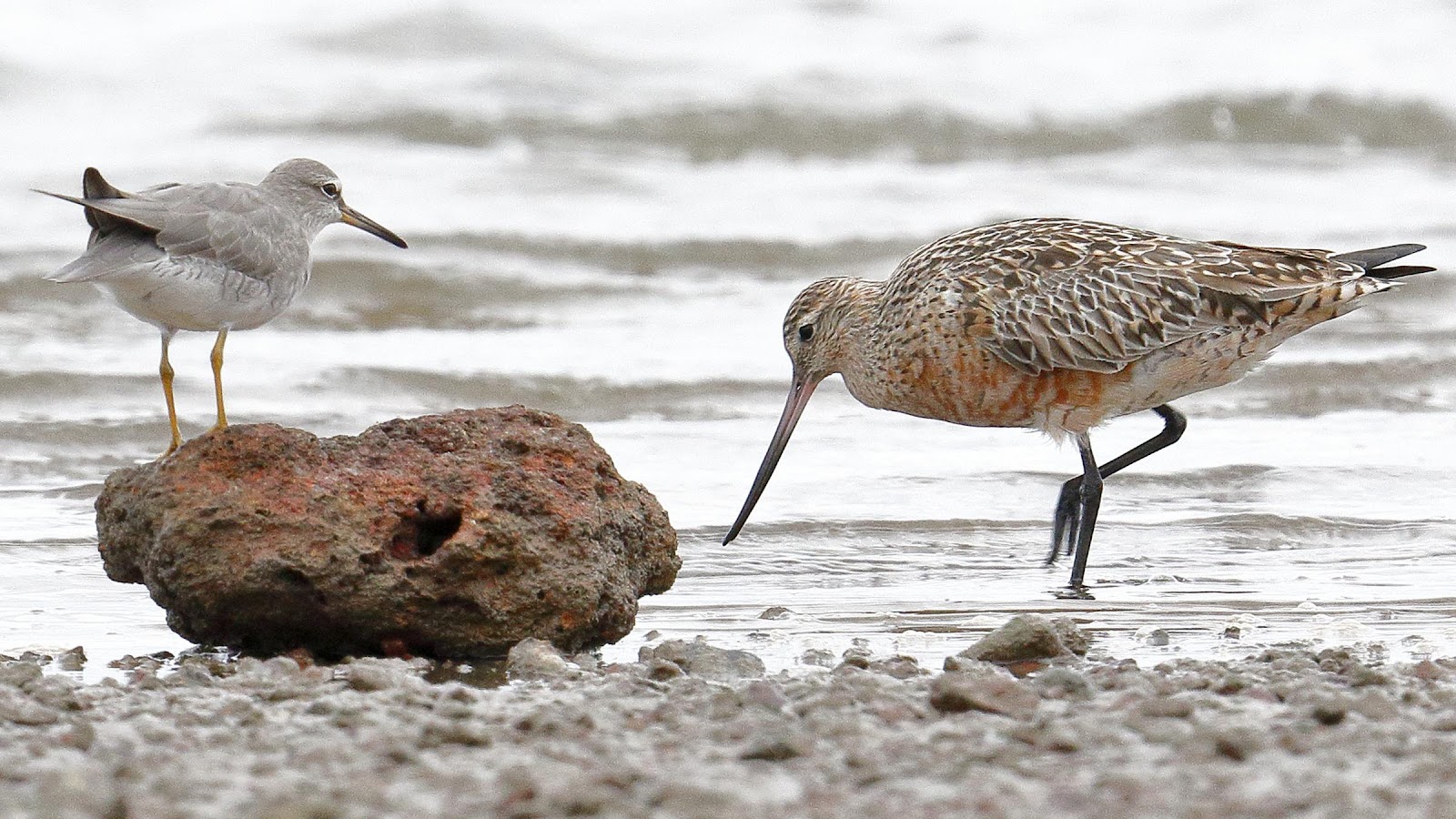 Grey-tailed Tattler and Bar-tailed Godwit next to GJ Walter Park at Cleveland, Photo by Chris Walker
Guest speaker bio: Micha Jackson is a PhD candidate in the Fuller Lab at the University of Queensland researching conservation and management of habitat for migratory shorebirds, a group facing an increasingly uncertain future in our region. Migrating shorebirds ignore international borders, so Micha’s research has led to the establishment of research collaborations in China and Singapore, countries strategically placed to facilitate shorebird recovery. Micha is passionate about conservation and is currently serving as the president of the Society for Conservation Biology UQ Brisbane chapter and as a member of the Birds Queensland management committee. She frequently gives public talks on shorebird conservation and enjoys participating in bird surveys and counts. Prior to commencing her PhD, Micha spent 7 years working with Indigenous groups on land and sea management and associated wildlife research in remote northern Australia.

Make sure not to miss this wonderful guest presentation at the upcoming AGM, for which you will find the details listed above! 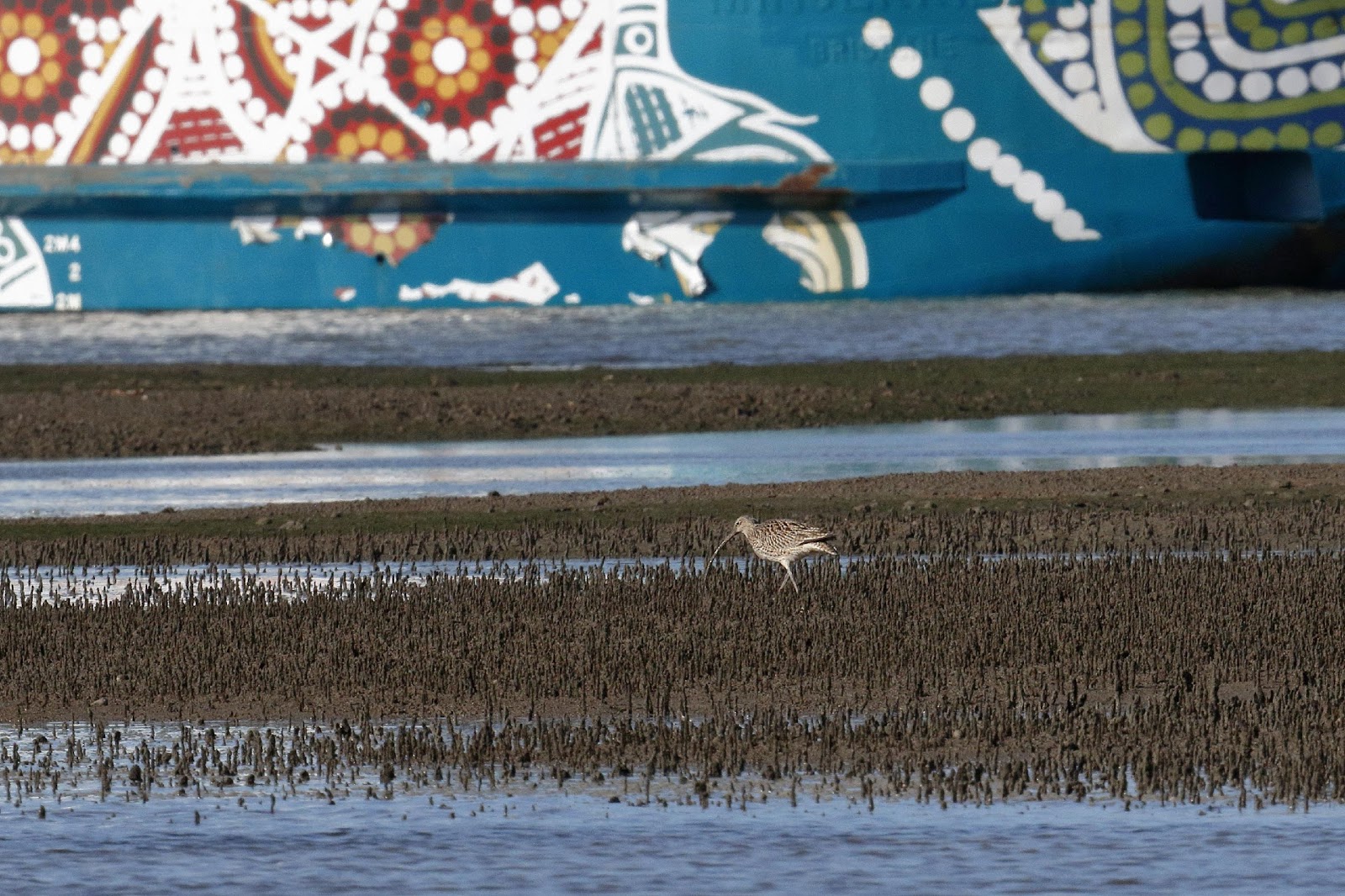 Far Eastern Curlew near the ferry at Toondah Harbour, Photo by Chris Walker

The State of Cylinder Beach

(4) Sub-standard toilet and shower facilities
The toilet/shower block is worn, rundown, thoroughly outdated, dirty and unpleasant to use. The small number of toilets and shower facilities is inadequate for the number of people using the beach (as noted above, SLSQ recorded more than 304,331 beachgoers at Cylinder in 2016/17 season).
See images in Appendix 4.
Action required –
- New, properly designed, environmentally sensitive toilet, shower and changing facilities need to be installed.
Conclusion
In summary, FOSI requests that RCC urgently undertake the following actions in the reserve:
- Proactively manage invasive Cotton Trees and control environmental weeds.
- Sensitively restore original vegetation.
- Effectively manage storm water including the construction of environmentally sensitive swales to disperse the run-off.
- Connect all Point Lookout houses to the sewer system
- Provide much clearer warnings to the public of the danger to children, in particular, of playing in and consuming contaminated water.
- Properly maintain the children’s playground, picnic areas and beach access pathways to an acceptable level. Grass should be mown regularly, eroded areas reinstated, picnic facilities  upgraded and bins emptied frequently, particularly during peak holiday periods.
- Implement well designed, environmentally sensitive parking management using porous natural materials and landscaping solutions
- Construct new, properly designed, environmentally sensitive toilet, shower and changing facilities.
We look forward to your attention to these issues and your response to this letter.
Marry Barram, President 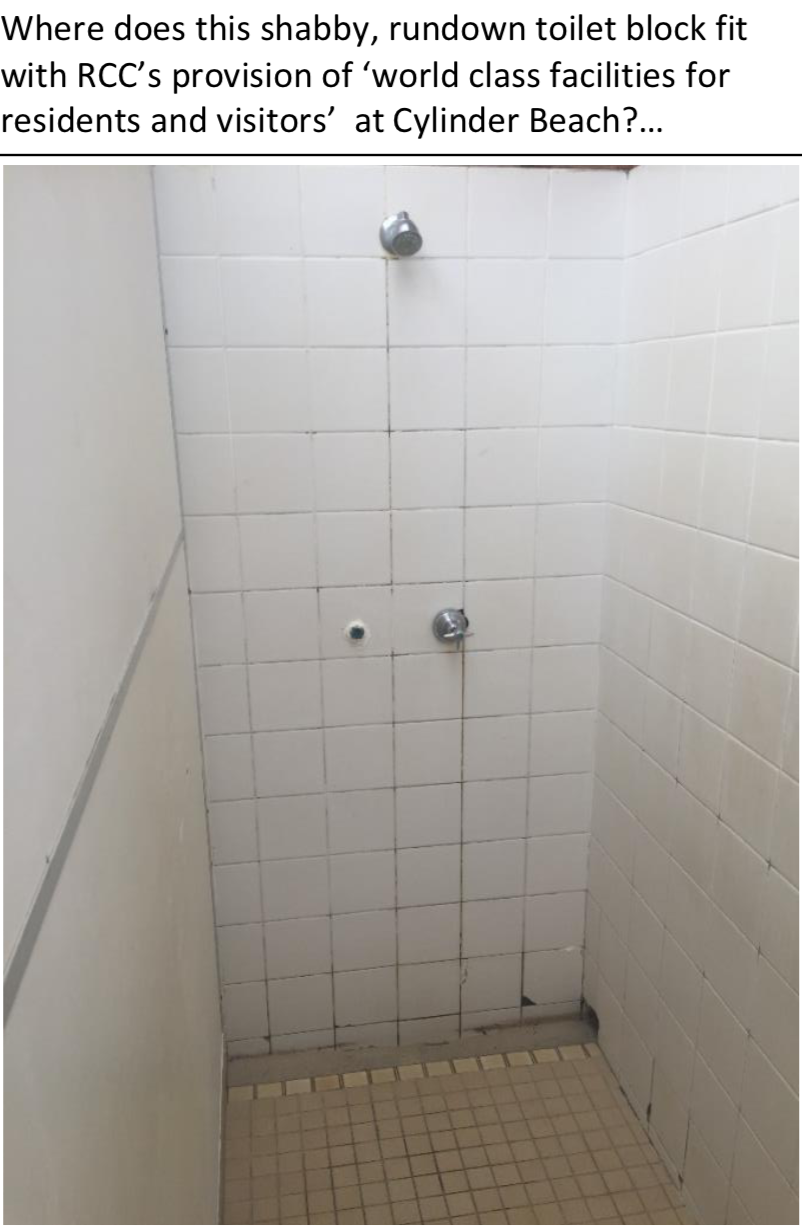 Above: Where does this shabby, rundown toilet block fit with RCC’s provision of ‘world class facilities for residents and visitors’ at Cylinder Beach? 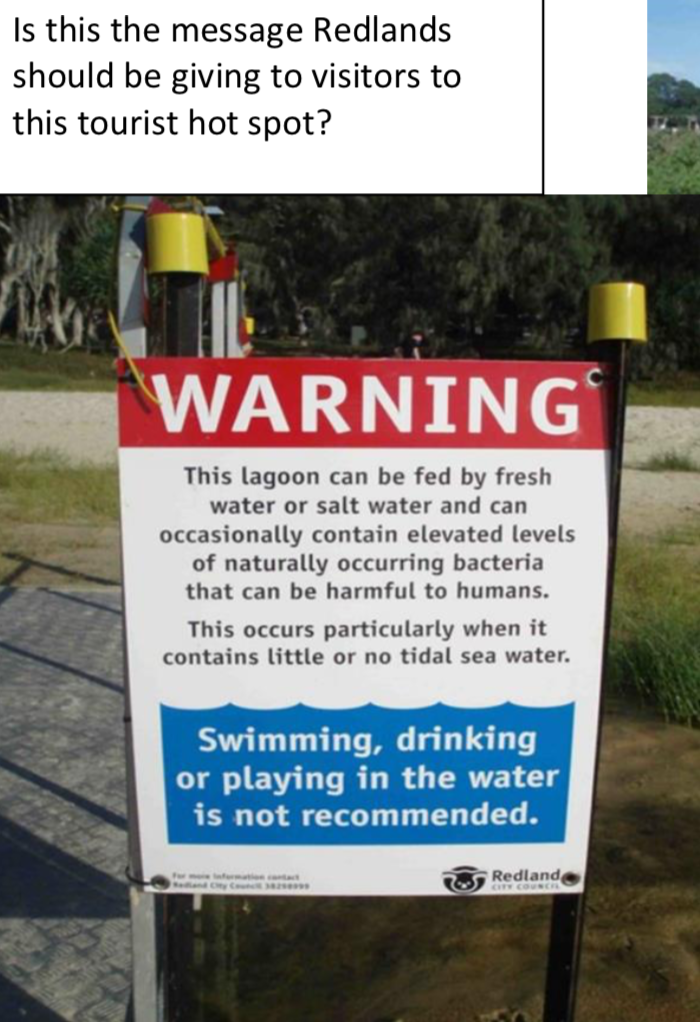 Above: Is this the message Redlands should be giving to visitors to this tourist hot spot? 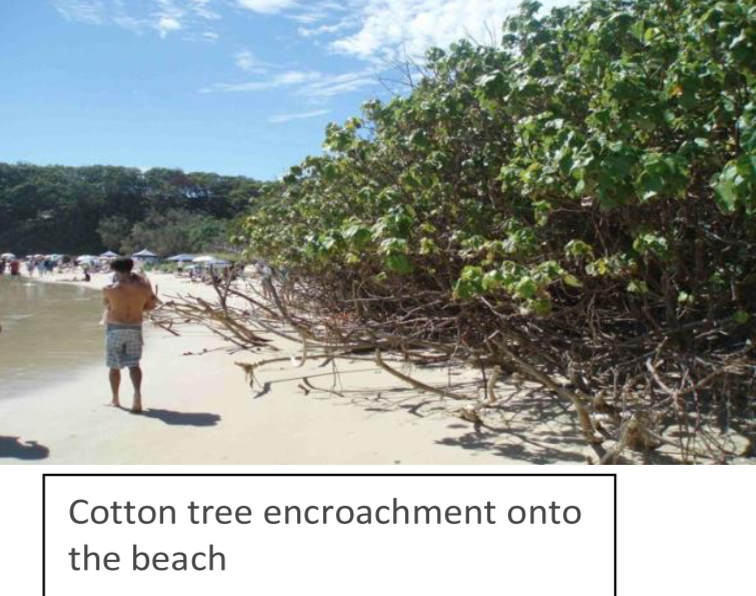 Above: Cotton tree encroachment onto the beach 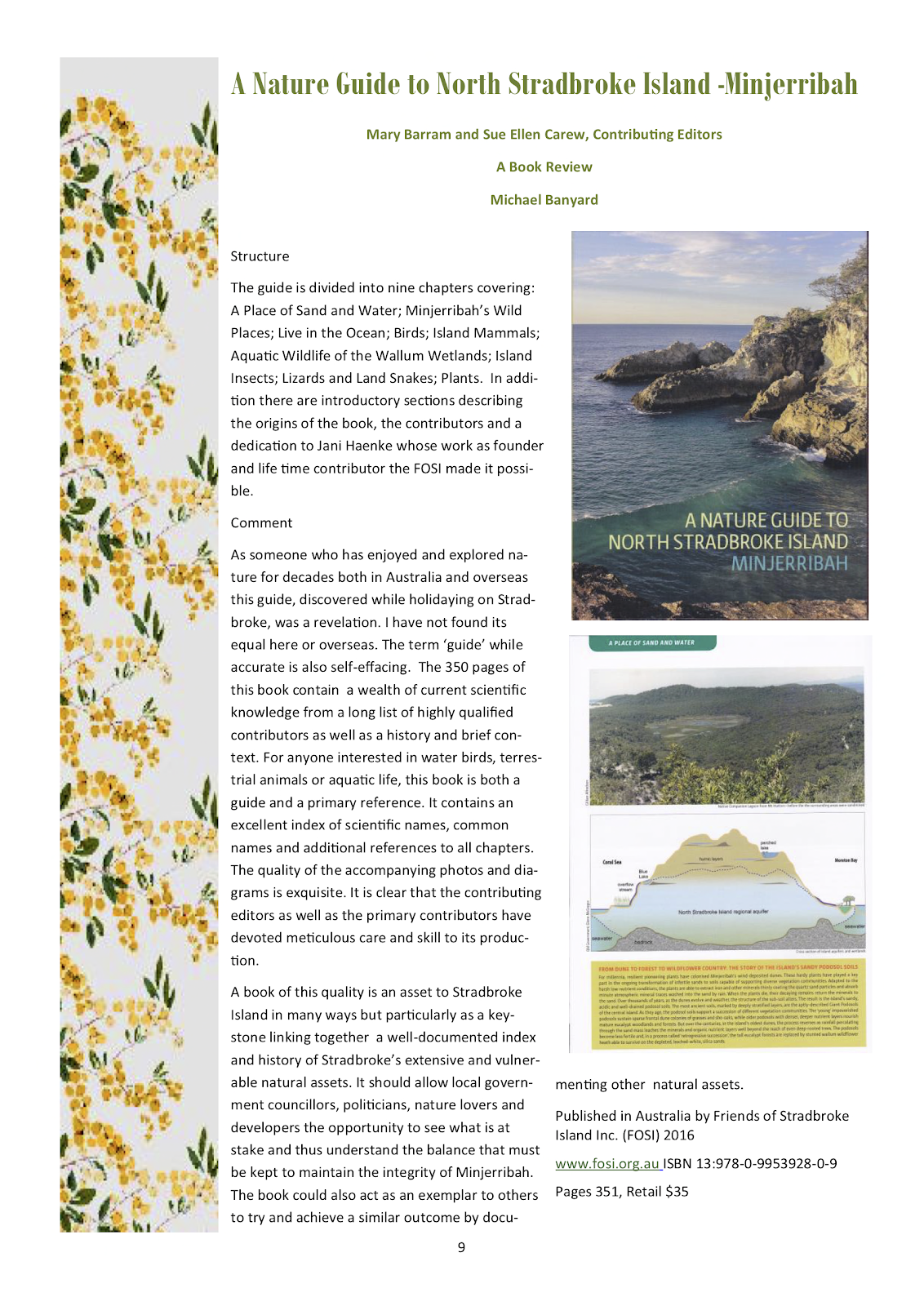 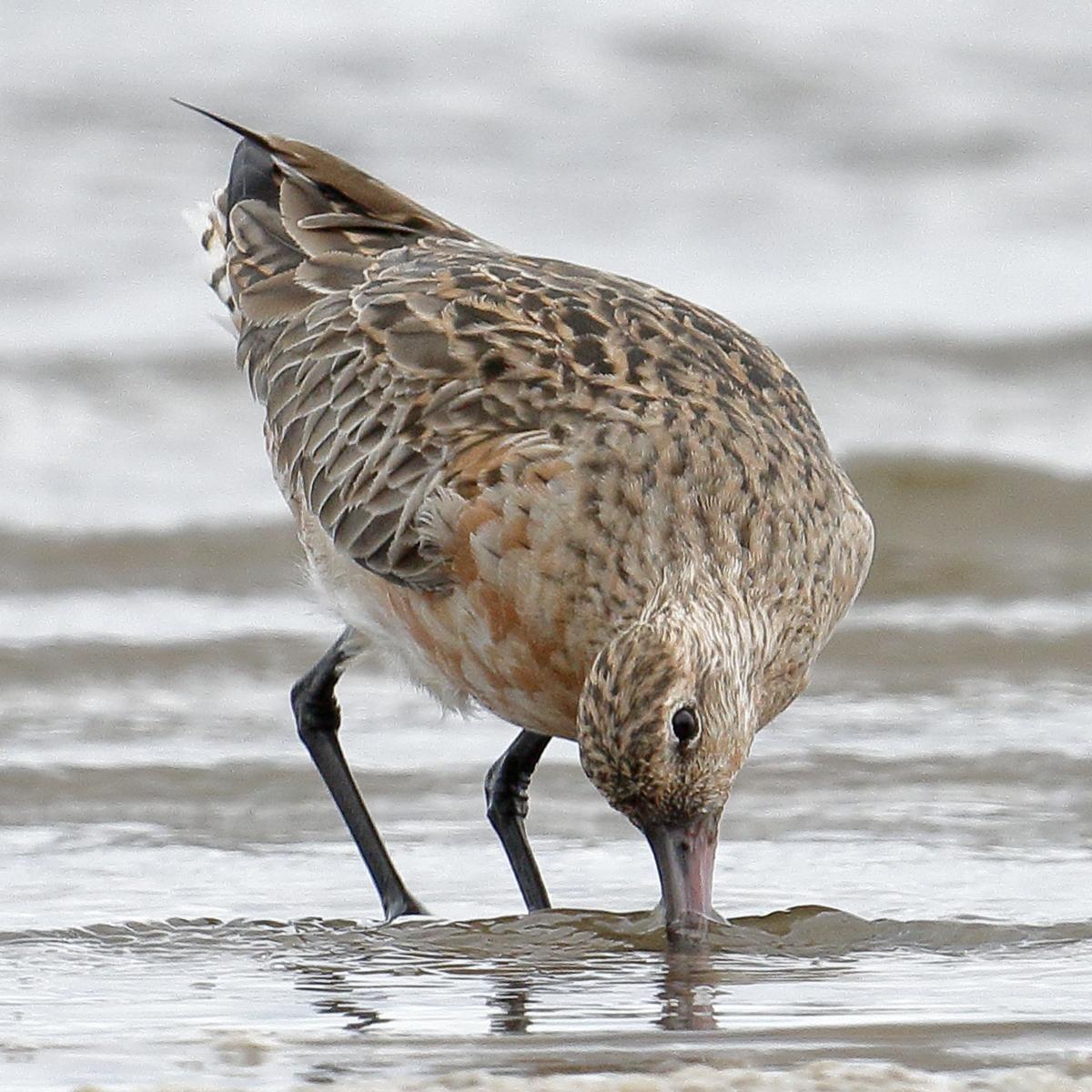 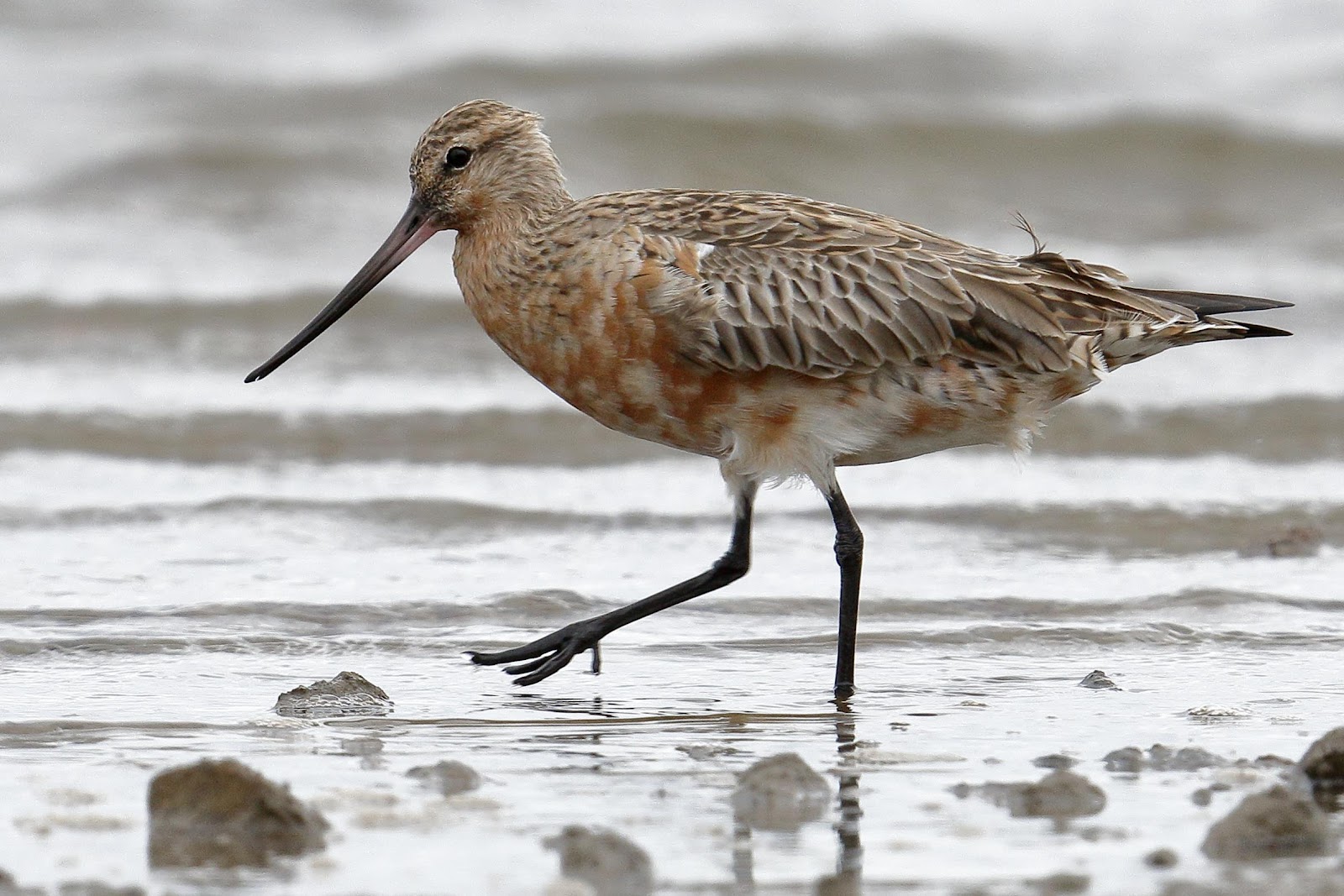 Facebook and other social media are setting the agenda for environmental issues.
FOSI has very recently embraced this trend with our own Facebook page Friends of Stradbroke Island- Minjerribah-Nature Guide.
The page is designed to complement our Nature Guide and to celebrate the island’s natural beauty and wildlife through the seasons. The page also has a handy ‘Shop’ to purchase copies of the Nature Guide.
Wild Redlands is a wonderful nature photography Facebook page with a focus on the migratory and resident shorebirds around Toondah Harbour - Wild Redlands with Chris Walker.
Toondah Harbour is being resisted by a number of community groups in the Redlands. You can add the following facebook pages to your likes and follows.
- Save Straddie
- Save our Bay Toondah Harbour
- Toondah Friends.

Redlands 2030 also has information of note, look for the ‘Toondah Harbour’ tab on the website.
Have you considered making a donation to support FOSI’s work?
Friends of Stradbroke Island relies on the generosity of our members to fund our work. All donations made to the Environment Fund are tax deductible.
It is easy and secure to make a donation by bank transfer – email us at info@fosi.org.au for details how.